On Sunday 3rd October 2021, the Bristol Hebrew Congregation hosted a Civic Service to commemorate the 150th anniversary of its recently renovated, Grade II-listed Park Row Synagogue. The service was organised by a Sub-Committee of the Synagogue Council, consisting of Dr David Turns, Mr Gerald Levy and Mr Clive Lawton OBE.

The building – the fourth to have been occupied by the Congregation, but the first (and so far, only) building in Bristol to have been designed and built specifically as a synagogue and never used for any other purpose – was consecrated on Thursday 7th September 1871, at which time it was known as “the New Synagogue, Bristol”. Its construction was supervised by the dean of Victorian synagogue architects, H.H. Collins (assisted by the Bristol City Surveyor, S.C. Fripp), and it is one of the few examples of High Victorian synagogue architecture in England to have survived in essentially identical form to the present day – apart from some bomb damage suffered during the ‘Bristol Blitz’ in World War II, and substantial alterations to the roof and upstairs premises occasioned by the addition of a communal hall and consequent shortening of the ladies’ gallery in the 1970s.

In attendance on this occasion were Her Majesty’s Lord-Lieutenant for the City and County of Bristol (Mrs Peaches Golding OBE), the Rt Hon. Lord Mayor of Bristol (Cllr Steve Smith), the High Sheriff of Bristol (Mrs Susan J. Davies BEM) and her consort Cllr Chris Davies, the Honorary Recorder of Bristol (His Honour Judge Peter Blair QC) and his consort, and the Deputy Mayor of Bristol (Cllr Asher Craig), as well as other city dignitaries and community leaders, Honorary Officers and Councillors of the Synagogue, and Members and former Members of the Congregation.

The Address was given by Rabbi Joseph Dweck (Senior Rabbi of the S&P Sephardi Community in the United Kingdom) on the theme of Jewish identity. Two commemorative plaques were unveiled by the Lord Mayor and by Rabbi Mendy Singer of Chabad Bristol.

The service was led by Cantor Roland Brandman, with choral music provided by Mosaic Voices under the direction of Michael Etherton. The liturgical pieces sung at the service would have been familiar to congregants attending the building’s consecration in 1871: many of the melodies used in 2021 were written by such composers as Julius Lazarus Mombach (Choirmaster at the London Great Synagogue, 1841-1880) and his counterparts in Berlin (Louis Lewandowski, Choirmaster at the Neue Synagoge 1866-1894) and Vienna (Salomon Sulzer, Oberkantor at the Wiener Stadttempel 1826-1890).

The recordings below include some individual highlights, as well as a nearly 30-minute long clip of much of the 2nd half of the event, from the Closing of the Ark to the end of the Address (although this one isn’t the best quality since it was also being streamed at the time).

Original material from the opening in 1871 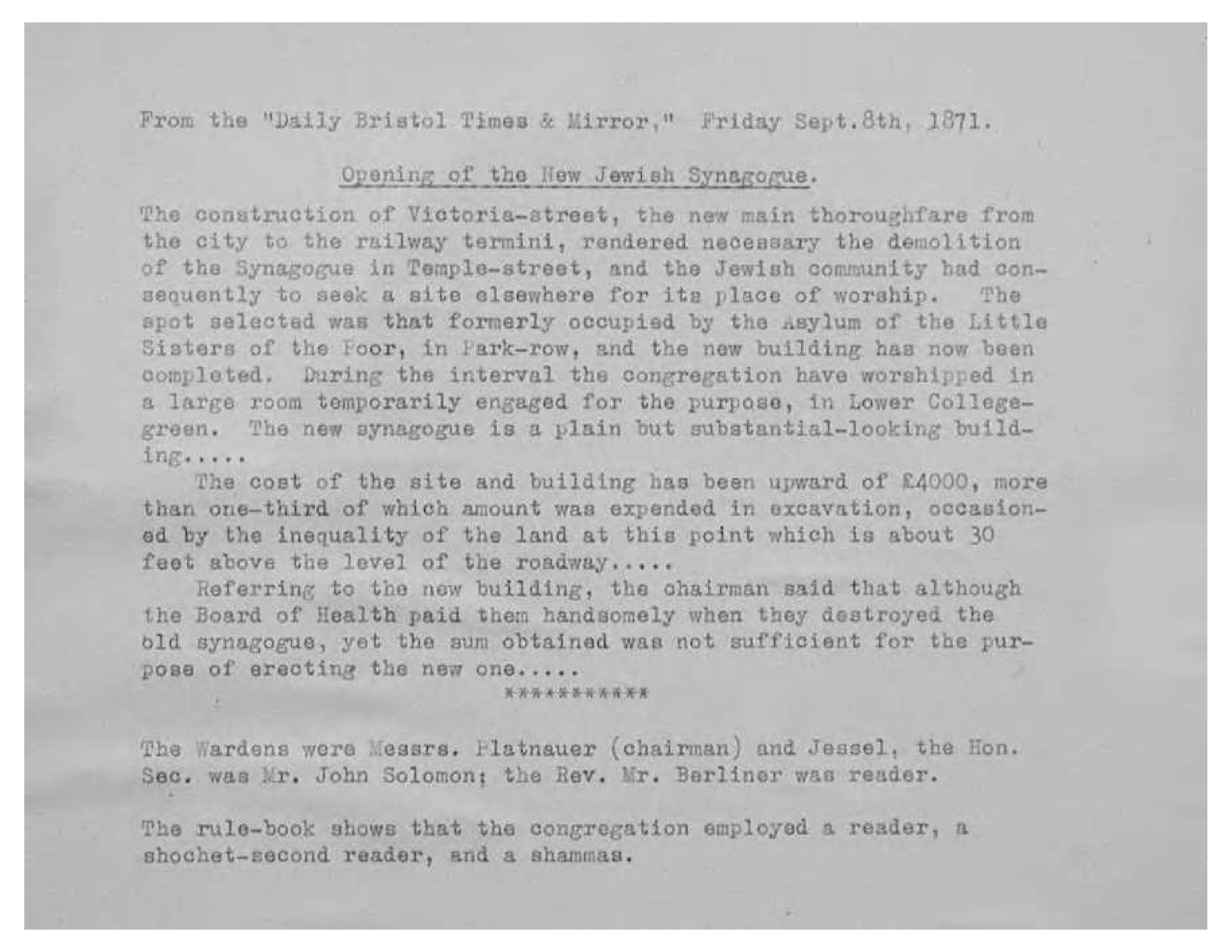 NEXT Wednesday June 26 is our second…

Our second showing this week will be The Band’s Visit, award winning comedy from Eran Kolirin.

There will be an introduction from Simon Weintroub, Deputy Head of Creative Arts at Wiltshire College.
Wednesday 26th June. Arrive for 7pm to start at 7.30pm

You can pay in advance by donating to our Lights Camera Lokshen appeal here.

Looking forward to seeing you all there.

A Talk from Jonathan Arkush,
President of the Board of Deputies
Thursday
28 January
7pm

This year, at the Bristol and West Progressive Jewish Congregation (BWPJC) AGM, which will be held on Thursday, 28 January, 2016, at 7pm, Jonathan Arkush, President of the Board of Deputies, will be speaking.

He will be speaking first thing and “BWPJC business” will be discussed afterward. The BWPJC Council would like to extend an invitation to all of the Bristol Hebrew Congregation to join them to hear Mr. Arkush speak at 7pm on the evening (there will be some light refreshments during a short break afterward prior to moving on to the synagogue-specific business).