Come join us for a night of festivities for all the family!

Free to all (obviously!)

We’re excited to offer a day of delicious food, good vibes of Shabbat, and a youthful community!

Bristol is happening this ShabbatUK!

Children’s services and Activities @ 11:30 AM

RSVP to ujaskiel@aish.org.uk is appreciated but non essential.

For more information please download a PDF brochure of the day here.

Bring your family along to our communal celebration of Channukah. There will be games, music, dancing, spinning, crafts, and lots of latkes & doughnuts!

With Doughnuts n’ Latkes, Chocolate Gelt, Hot Drinks, Fire Show and Free Raffle, this celebration will be fun for all ages!

Park Row Synagogue are hosting a talk from Alex Schlesinger on The History of the Jews of Bristol & Bath, followed by candle lighting, and a delicious supper.

All are welcome, for more information or to book a place please contact Eve Gordon on 962 0187.

Bristol’s Muslim-Jewish charity, Salaam Shalom, and local actor Ben Nathan, are set to bring a new theatre production to the City (6-10 Nov), hot on the heels of its London premier (30 Oct-3 Nov).

Ben heard stories from those who are Jewish, Muslim, Christian, secular, orthodox, settler, ideological, military and political, on both sides of the Israel/Palestine Green Line. Using family and friends in the region, and his familiarity with life on the ground, he gained the commitment and trust of these individuals, groups and organisations. Now those stories will be told in a ‘verbatim’ theatre production with Ben acting alongside Lara Sawalha.

The name was conceived because Palestinians and Israelis have one indisputable thing in common: they are all Semites. “Semites”, directed by London-based Daniel Goldman, “explores the challenges of living an ordinary life under extraordinary circumstances, of having dialogue with ‘the other’, of loss and hope, of staying alive. In a world of echo chambers, fake news and fear.”  According to Producer, Arsalan Sattari: “Audiences are invited to leave their preconceptions at the door, and open their eyes, ears and heart”.

As well as the production itself, Salaam Shalom plans to work with members of the production team to deliver workshops, based around the topic of dialogue, to community organisations and schools in London and the South West.

For Ben Nathan: “Using the interviewees’ words, verbatim, I want to encourage insightful discourse on this complex subject.  This rarely happens because of our often linear and simplistic view of the conflict. By presenting genuine, human experiences from those living this story, I want to challenge polarised perspectives and encourage audiences to reflect and re-examine what they thought they knew.”

Martin Vegoda, Chair of Salaam Shalom: “We’ve been delighted to support Ben’s concept of workshops around a verbatim theatre performance.  Using Israeli and Palestinian voices telling their own story fits us perfectly.  Over the past 12 years Salaam Shalom has offered arts and media activities which enable people from different cultural backgrounds to learn more about each other and challenge their not always valid perceptions.”

“Semites” website is www.semites.one    To book at the Loco Klub, go to www.locobristol.com

Bristol Hebrew Congregation, together with the Bristol & West Progressive Jewish Congregation and Clifton Cathedral, invite you to hear the stories of two peace activists: one Israeli and one Palestinian.

Jews, Christians and people of all faiths and none, are invited to this free interfaith event, in partnership with Solutions Not Sides.

Venue: A Bristol location. Full address will be sent to registered attendees via Eventbrite. 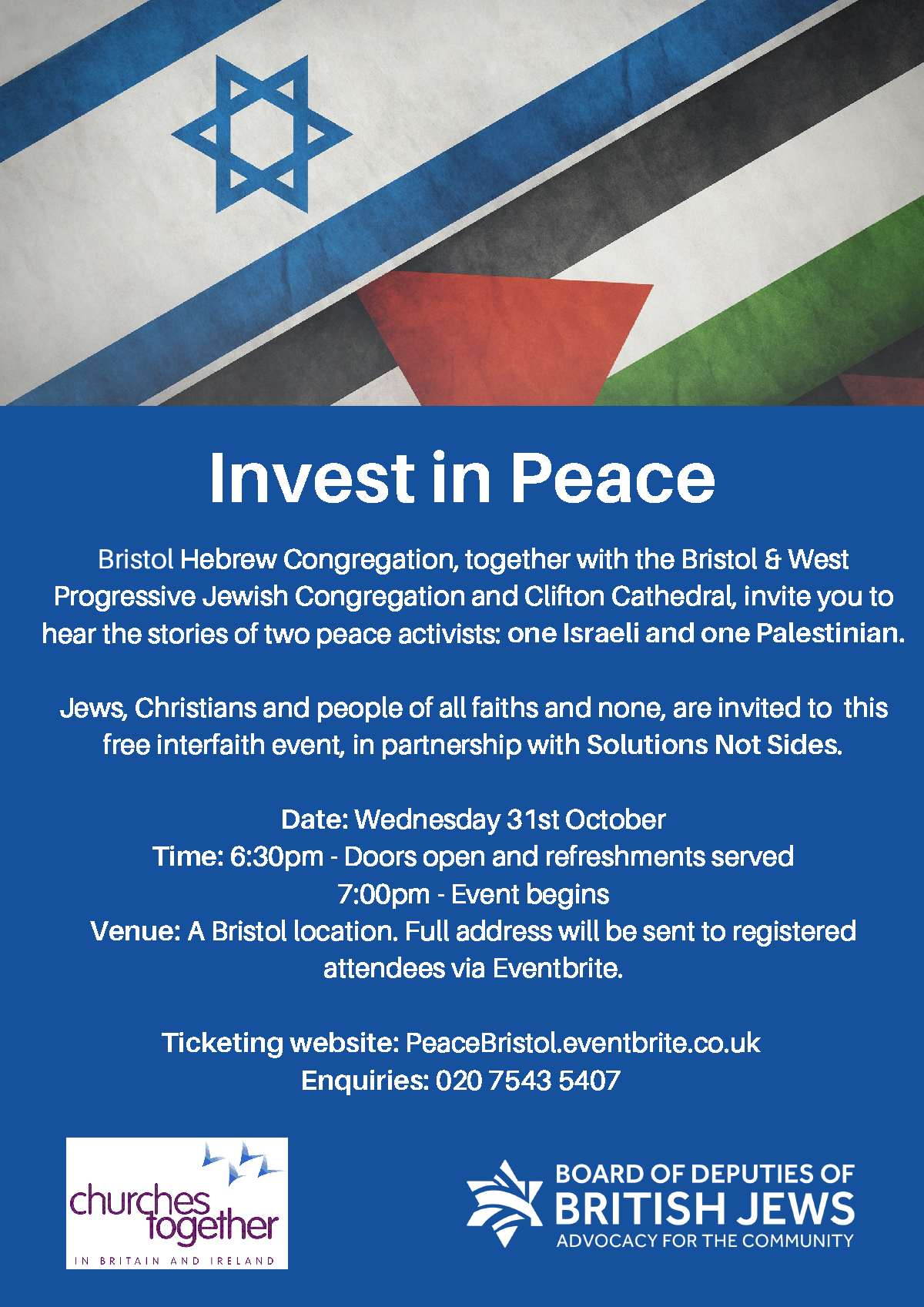 Below you will see a table of all the dates and times for this year’s high holidays. Please feel free to come along to any of our beautiful and inclusive services…there is no need to book. Shana Tova to one and all! 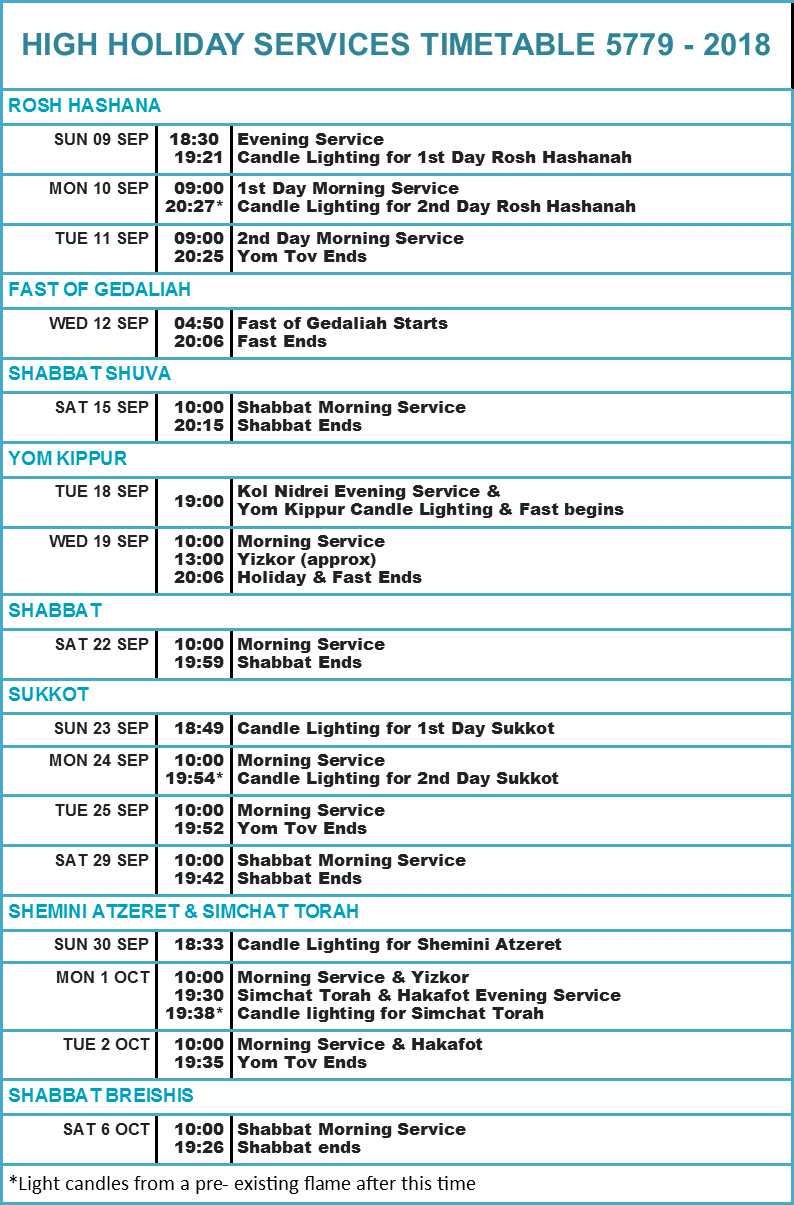 In the Hebrew year 2448, just weeks after leaving Egypt, we all stood together at the foot of Mount Sinai where G-d gave the Torah.

3,330 years later, we are still celebrating!
We re-live the Sinai experience and the Giving Of The Torah by hearing the 10 Commandments being read from the Torah on Shavuot morning and enjoying dairy foods. (Cheesecake is a favourite, although customary not obligatory.)

Rabbi Mendy & Chaya Singer will be hosting a celebration this weekend at the Park Row Synagogue on Shavuot morning for the reading of the 10 Commandments and a Grand Dairy Feast (vegan options too) following the prayer service. On Sunday, 20 May, 11am. We hope you can join us.

As Children are the future and the ones who carry the Torah on to the next generation, they will be included in the celebration with a fun Children’s Service and Ice Cream Party!

Looking forward to celebrating together this Sunday.

What does Kosher wine bring to mind? Palwin or Kedem?

You may be amazed at how the kosher wine market has developed over recent years. Today there are many award-winning kosher wines available. The best selling Moscato in the USA happens to be Kosher, with only a fraction of its sales actually to the Kosher market!

On Tuesday evening 15 May, Wine educator Ian Abrahams Dip WSET will be leading us with a guided tasting of eight selected wines. From California Zinfandel to Israeli Chardonnay to French Riesling to Spanish Rioja there will be something for all tastes.

Served up with fine Kosher cheeses and light refreshments, this will be an evening to Un•wine•d in great company!

We look forward to meeting you at this unique and special evening.

10am
Welcome and songs (Modeh Ani, Shema, numbers to 10, Aleph bet).
Breif intro to Pesach and splitting the kids into groups.
10.30am
The older children will do a challah vs Matzah making workshop
They’ll get to see the difference between the two and learn about Matzah and why we eat it at Pesach.
The younger groups will take part in Pesach themed arts and craft activities.
11.10am
The younger group(s) will take part in a baking activity.
The older groups will split into their 2 groups, the older to learn about Pesach through group discussion and activities- thinking about the exodus, what that means for us, being a stranger in foreign lands, etc. The younger group will be learning through games and crafts.
11.45am
We’ll come together to say blessings over fruit/veg/ kosher snacks and eat them!
12.15 End.

Please bring your kids in clothes that you dont mind being stained/ or bring an apron/old shirt for them to wear to protect their clothes.

Please bring snacks with a Hechsher (kosher symbol) or fresh/ dried fruit or veg. It’s always lovely when people bring a little extra so there’s some to share with friends.

Cheder costs 50p for members or £2 for non-members per child.

There’ll be a space set up for younger children to play and eat too, as the film is long and a little scary.

We hope to see lots of your lovely faces there! Please feel free to invite friends and family too- just let Shelley know by email so that we can cater for you.